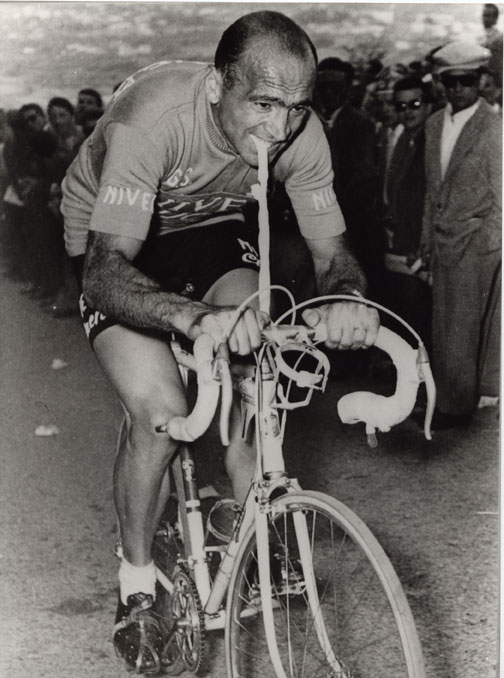 In the 1956 edition of the Giro d’Italia, Fiorenzo Magni crashed on the 12th day of racing and broke his collarbone. Refusing to abandon the race, he wrapped his shoulder with elastic bandages and continued on, but he had a problem: to generate power on a bicycle you have to pull up on the handlebars, which you can’t do with a broken collarbone. Magni’s solution was to wrap an innertube around his handlebars, clench it between his teeth, and pull up with his neck muscles. He raced 11 more days and finished second overall.

That’s a great example of “HTFU”, a cycling term that originated in that same era. Say you’re a veteran cyclist, your team is on the 6th hour of a training ride, and a rookie complains that he’s too tired to continue. Your response would be “HTFU” or “Harden the F*** Up!” And that’s the way cyclists trained for a long time. They worked as hard as possible and then showed up on race day and hoped things went well. It sounds crazy that world-class athletes would use no more science than to work hard and hope, but that’s exactly what most of you are doing. You’re working your rear off every day, taking care of customers and employees, and then holding your breath while QuickBooks runs your income statement at the end of the month. There’s no science, no system, and a lot of effort is going to waste.

Cycling changed in the early 80’s with the heart rate meter, which allowed us to scientifically measure the effort going into the training process. That was a big step forward, just like it was a big step forward when some of you began driving activity-based metrics like Sales Calls, Quotes Sent, or Cycle Times to improve your results. I’m a BIG fan of activity-based metrics and driving them is worlds better than the HTFU approach. But increased activity is not a guarantee of improved results. There’s a real chance you’ll increase the activity at the front-end of the process only to find at the end of the process (when it’s too late to make a change that would impact the outcome) that your results didn’t improve. There’s still too much hope in that equation.

In 1989 the power meter, a device that measures the output of the rider in watts, hit the market and changed the world for top-level cyclists. Power is the perfect metric: it’s a result that tells you how effective your training activities are, but it’s also a leading indicator that can be measured throughout the training cycle. If your power is improving, you can be confident your race results will improve; if it’s not improving, you still have time to change your training plan and gain the power you need before race day. It sits between the activities at the start of the process and the results at the end of the process and totally removes hope from the equation. You need a similar metric, a Power Metric, for your business.

I was fortunate to have a Power Metric in my last business. It was 1st Quarter Gross Profit divided by Customer Acquisition Cost or “Q1GP/CAC”. If that number was 0.6 or better, I knew we were growing profitably. CAC incorporated both the level of activity going into the sales and marketing process and the effectiveness of those activities.  Q1GP incorporated nearly every other operational aspect of our business from supply chain management to shipping costs. Q1GP/CAC told me nearly everything I needed to know on a week-to-week basis about the financial performance of my business. It was simple, easy to calculate, and created great focus for our team.

There’s a little HTFU in all entrepreneurs, and that’s good. Just like an elite cyclist, the willingness to suffer sets us apart from our competitors. The beauty of the Power Metric is that it focuses that suffering into strength; strength that will not just set you apart from your competitors but will allow you to crush them.

So, what’s your power metric? Pro tip: it’s probably a ratio that involves a measure of profitability and a measure of sales and/or operational process effectiveness. Think about it and give me a call, and we’ll dream about how you can crush your competitors.