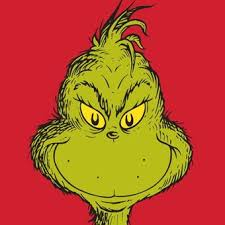 Everyone knows about the Grinch, that angry, green guy who hated Christmas with a passion. What most people don’t know is why he had this disdain for Christmas, and that’s what I’m going to tell you about today.

You see, the Grinch wasn’t always a yuletide hater; he was once an entrepreneur with a promising skin-care business (ironic given his complexion). The market loved his products, and he was growing rapidly, but he had one big problem: he worked way too hard even though he had a large staff that was supposed to lighten his load. To make matters worse his business was seasonal, generating most of its revenue around Christmas, and no matter how much he tried to prepare, the holiday season was filled with chaos, missed shipments, and AR problems. And when an especially busy season resulted in a cash crisis despite record revenue, the Grinch threw in the towel. He sold his inventory, fired his employees, and shut down his business. Christmas had crushed him, and he would never forgive it.

Legend has it that the Grinch’s heart grew three sizes and he stopped hating Christmas when he was touched by the kindness of Cindy Lou Who of Whoville. Don’t believe that – it’s pure Whoville propaganda. The truth is the Grinch’s heart grew when his business coach, a good-looking bald fellow, taught him that the key to engaging employees to lighten his workload and drive better profitability was something the Grinch did not have but could easily build – clearly documented processes.

If you’re feeling a little Grinchy this year, you might have a process problem also. In the absence of clearly documented processes, you can’t engage your employees, who generally fall into three buckets:

But if you turn that on its head and get your Core Processes Documented and Followed by All as we say in the EOS® world, you get the opposite. Your average players have a process they can follow to be productive; you’re “A” players will give their full effort, because they can see the path to success; and your superstars will do amazing things for you and your customers, without the risk of losing their sanity. That was the revelation that caused the Grinch’s heart to grow and make him love Christmas and his business again.

Even if you don’t live in a cave with a dog named Maxx, I’m sure you can get excited about a smooth-running, scalable, profitable business. A strong Process Component™ is one of the most important, and most often neglected, keys to getting there. The Grinch, Christmas, and process documentation – what could warm your heart more?

I hope your holidays are amazing!